So I got back from Bath late on Monday night, Wednesday I was looking at my schedule for the rest of my 2 months (!!!) over here. I realized my time is flying and I am running out of weekends for my adventures. I knew I still really wanted to go to Scotland, and this weekend was my best shot. I tossed it around in my head, I have 2 papers due soon, I had just gotten back from Bath, and no one would be able to go with me. At about 8 pm Wednesday I decided to go for it (I mean when else am I going to be able to go to Scotland for a weekend) I booked a hostel and found a train ride that would work, I left Thursday at 3:00 pm. 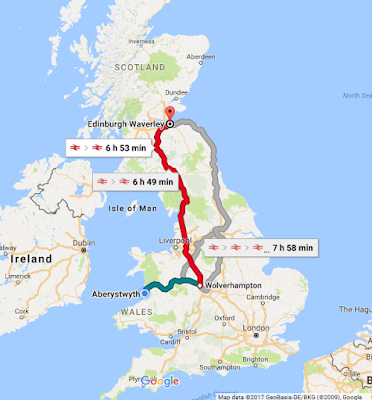 The train journey was 7 hours long, and it was mostly in the dark. I tried to get some work done on the train, and actually managed to start an essay!! I arrived at Edinburgh Waverly train station at 10:30 Thursday night and walked the 15 minutes to my hostel (the hardest part is trying to orient yourself in the train station and go out the right exit, thankfully there are nice policemen to help!).

On Friday morning I ate breakfast at a cute little café and had the thickest piece of French toast I’ve ever seen, I’m serious it was like 2 inches thick. I then booked a city tour to see what the town had to offer. Edinburgh is unlike any other city I’ve visited, it is very mid-evil feeling, and has a clear divide through the center of town, with Old town being at the top of the hill, and new town at the bottom (mind you it’s called new town, but it was built in the 1700s). At the very top of the hill in the middle of town was the Edinburgh castle, the castle is probably not what you’re thinking. It’s a newer castle (in terms of castles) and is built more like its own village other than one large ominous structure. A lot of the buildings have been turned into museums for the tourists. I got to see the Crown Jewels of Scotland, which was really cool, even though they’re not needed anymore and haven’t been used since Queen Mary II was crowned in 1692. Since Scotland is a part of the UK it no longer has its own royalty. The castle is so huge I spent most of my afternoon here. 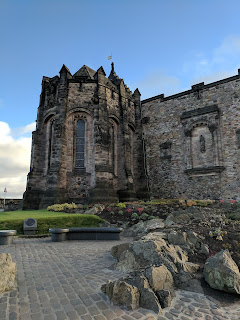 I’m not really sure how I found out about it or why I didn’t do more research, but I bought a ticket to La Clique Noël, it was a show being put on by Edinburgh Christmas market, so I was expecting a Christmas musical or something along those lines. Well, that is not what I got. It ended up being some sort of variety show, it started off with singing and dancing, but then it got a little weird. A self-proclaimed gay man came out in a blue skintight bunny suit, not really sure what the act was but it was amusing. The rest of the show included a sword swallower/fire breather, a hula-hoop man, and acrobats. I wasn’t quite sure whether to be entertained or confused most of the time, but it was quite the experience, at least the band was really good.


Well I’m a country girl at heart and can only spend so much time in the city, so, I booked a day tour to see the Scottish Highlands. I had to get up at 7 am to walk to the meeting point, and our bus left promptly at 8. We drove about 1.5 hours through the lowlands/farming country to a small town on the edge of the highlands where we got breakfast. Afterward we drove over a fault line to a new tectonic plate and entered the highlands, it is amazing how quickly the scenery and roads changed. We drove about another 1.5 hours with many pictures stops along the way to the valley of Glencoe (Glen means narrow valley in Gaelic). Glencoe is considered one of the most picturesque valleys in all of Scotland, and Scotland was just recently voted the most beautiful place in the world, so that’s saying something. It was a gorgeous view, with snowcapped mountains on either side. It is late fall, so only the tallest mountains have a layer of snow. We stopped at Glencoe visitor site before travelling about another 1.5 hours (with picture stops) to Fort Augustus. We had 1.5 hrs. here and I opted to go on the Loch Ness boat tour, a simple boat ride just a way around the Loch Ness (Loch=Lake in Gaelic. There are 39,000 Lochs in Scotland) Loch Ness is the largest Loch in Scotland and of course famous for the tales of its monster. Unfortunately, the scariest thing we saw was a wild goat. We then got back on the bus to head back toward Edinburgh. We had 2 quick stops along the way home, but it was dark now so it was a quick trip back to Edinburgh, and by quick I mean like 4 hours. The day was a lot of car time, but I’ve learned that’s the best way to see a lot. I wasn’t so bad our guide, Nick, was a great story teller and kept us entertained. We heard stories about the history of Scotland and important battles and Kings. We heard a lot about the highland Clans of Scotland as well.


When I got back to Edinburgh, the Christmas market was open, I just did a quick walk through and decided I would go back tomorrow when it was less crowded. In Edinburgh today, there was a Scotland vs New Zealand Rugby match. I hear it was a really exciting game and the closest Scotland has ever come to beating New Zealand (for us Americans that don’t follow rugby, New Zealand is the best rugby team in the world). Every time we stopped on the way home our driver would turn on the game on the radio to get updates.

I spent most of Sunday wandering around the cobbled streets of old town and just taking it all in, stopping occasionally to hear street musicians play the bagpipes. I walked around the Christmas market. This market is huge, it is known as one of the best Christmas markets in Europe, and most major European cities have Christmas markets. This weekend was opening weekend and they go for 7 weeks, I came the right time. They have the main market on Princes street in front of the castle, here they have all the shops, food stands, rides, and Santa Land for the kids with a Christmas tree maze. On George street, a couple streets over, they have an ice skating circle, a bunch of stages set up for shows, and Ice Land (not sure what this was) and some more shops. I walked around for a while taking it all in, getting a French lunch of potatoes and smoked sausage. I caught the 3 pm train back toward Wales.


“Better to see something once, than to hear about it a thousand times”
Posted by Unknown at 4:32 AM