The land of Pasta, Pizza, and Prosecco

This past weekend I made my way down to Venice, Italy. The inspiration for this weekend was to see Hadlee, who has spent the semester just outside of Venice.


I left Aber on the train at 12:30 Thursday afternoon. My flight was scheduled for 6:10 pm but was delayed due to technical difficulties, that’s the worst delay, I mean are they sure it’s fixed?  I had a connection in Frankfurt ,and in Birmingham they told me I would have plenty of time to make my connection. We got delayed on the tarmac and got an even later start, midflight they came over the intercom and told us that they had rescheduled flights for some passengers but the connection to Venice had a ‘good chance’ to make our flight! I had my doubts because by the time we landed my next flight was already boarding and I still had to wait in line to get off the plane and then we were shuffled onto a bus that took us to the terminal. There was a person waiting for us at the terminal with info about connections, she told me my second flight was delayed as well and I could make it if I hurried. I had to go through security again and go through customs and then a quick jog through the terminal I was the last one on the plane, phew I made it just in the nic of time. 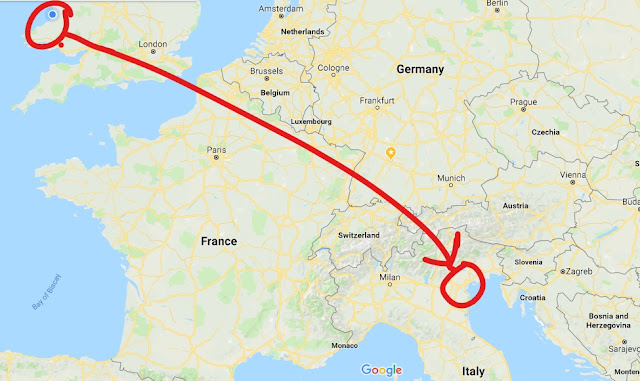 Now I put on a brave face but, landing in Italy I was a little uneasy. After 2 delayed flight and a quick jaunt through one of the largest airports in Europe, I landed in a new place, where I didn’t speak the language, at midnight.  But new adventures and new places are what studying abroad is all about. If I never leave my comfort zone, I might as well have stayed in Indiana. You have to embrace the unknown and take life one step at a time! 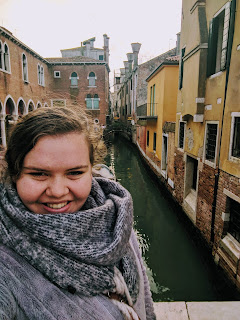 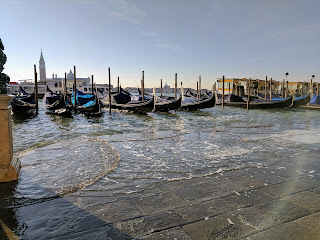 Now if you know me, I like to fly by the seat of my pants and I hadn’t figured out how to get to my hostel. I was staying on the Island of Guidecca and the only way there was by ferry or water taxi, they said a water taxi would cost me about €100, so ferry it was. Since it was so late, there was no one around to help me figure out public transportation, using google maps I realized I needed to get a bus to the ferry terminal. I followed signs to the bus station and there was a bus sitting there and I figured that must be the one I want… luckily it was😊. It dropped me off at the ferry terminal and according to google maps, I was supposed to catch the night Ferry. There is literally only like 5 other people around and there all tourists as confused as me. I found a ticket machine and bought a 75-minute ticket. I went into the terminal to catch the ferry, after looking at the signs closer I realized I went on the wrong terminal and when I couldn’t find the way out, I climbed over the gate to get out. I finally got in the right terminal and on the ferry headed the right way. I had a 35-minute ride to my hostel and when I got there to check in it was about 1:45 am. They gave me a room and a bed and when I went up there, there was a girl in my bed, I went downstairs and got a new bed, there was someone in that bed, it was really late and I was exhausted and decided to just climb in an empty bed.


On Friday I spent most of the day just wondering the alleys and bridges of Venice. I visited Piazza San Marco and Saint Mark’s Basilica. The basilica is a gorgeous church decorated on these beautiful, intricate mosaics that cover the dome ceilings, I couldn’t take pictures, nut I highly recommend that you google it! I wondered around and got lost and ate spaghetti for lunch. At around 6 pm I met Hadlee. She had an exam today and then came down to Venice, Hadlee is now finished with her program and flew home on Saturday. It is crazy to think that she is already home and I have 2 more months over here!! Don’t ask me how that worked out, because I couldn’t tell you. It was great to catch up with Hadlee and see a familiar face! We got dinner and gelato before she headed back to her hotel near the airport.

On Saturday, I visited the Islands of Murano, Burano and Torcelo. They are three islands just a 30-minute boat ride from Venice. Murano is famous for its glass, and we visited a glass master and he demonstrated glass blowing. I then headed over to Burano, famous for its lace making and colorful buildings. This is the most picturesque island with all the color and beautiful canals, I could have walked around here for hours. Lastly, I visited Torcelo, filled with history it is the first island settled by the Venetians and home to the oldest church in the area. After an afternoon island hopping I headed back to Piazza San Marco to go through Doge’s Palace. Fortunately, I got there just before last entry, unfortunately, I only had an hour to see it and was too late to get an audio guide. The museums and writing was all in Italian, so I wasn’t really sure what I was looking at most of the time and didn’t learn much about the place but it was still beautiful. I was exhausted after a long couple days and headed back to my hostel where I got dinner, and went to bed early. 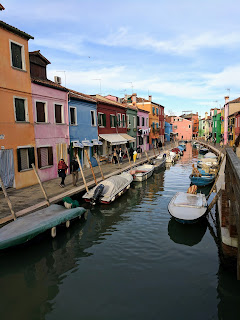 On Sunday, I took a day trip to Verona, the birthplace of Romeo and Juliet. Cole took a day trip here when he was in Venice and Hadlee highly recommended it. It was about an hour and half train ride from Venice to this romantic city. I explored a bit on foot and got some amazing pizza. Verona was crowded with tourists, they had a winter fair and a Christmas market happening, so the locals were out along with all the tourists. I took this cute little train around for a quick city tour to see as much as I could in the little time that I had. I then explored the main attractions further, including a castle, and Juliet’s balcony, before hopping back on the train to Venice. In Venice I took a leisurely ride on the back of the waterbus down the main canal stopping for some more Gelato (when in Italy, am I right?) and getting some amazing views of Venice at night. Venice is in the Prosecco region of Italy, they make the most amazing sparkling white wine. And while I’m usually not a wine fan, I had to indulge, and Italy may have turned me into a wine fan (Prosecco at least)! 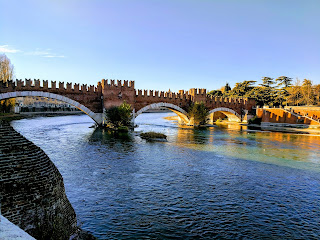 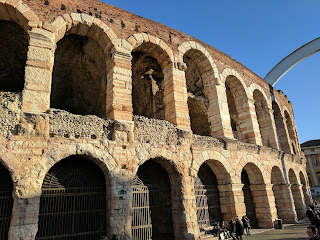 On Monday it was time to go home, but I had time for one last walk through of Piazza San Marco and this time, I was there at high tide and the square was nearly completely flooded. Water flowed up through the drains and filled the main square. Now all the platforms in the square made sense, they made a walkway above the water, so people could still mill around without getting wet! I made my way back to the airport for a smooth journey home. 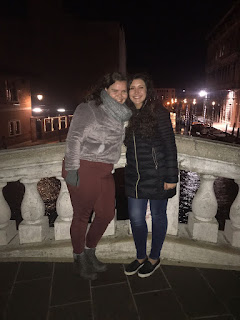 “Life is an adventure! Live it while you can. You can never have today again, tomorrow only comes once and yesterday is gone forever. Make your choice wisely, then live the adventure you create.”